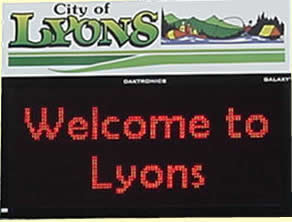 Lyons is a small town nestled in the foothills of the Cascade Mountains in Oregon. In 1880, Captain James C. Lyons and Henry Lyons, two Irish brothers, founded Lyons in the scenic North Santiam Canyon, 23 miles east of Salem. Other settlers soon followed from Scotland, Kansas and the Plains.

In the early years the timber industry and the railroad played an important role in Lyon’s economy. The timber industry is still strong and in recent years the North Santiam River, which rushes along the northern side of town, has become well known for its fishing and white water recreational activities.

Lyons incorporated on December 17, 1958 with a population of 400; it has now grown to 1,290. John Neal Memorial Park, on the banks of the North Santiam, was dedicated in 1963. The Lyons Memorial Park, next to City Hall, was dedicated in 1972. A children’s playground, by generous donations, was added to the park in 1996. Freres City Park is located on 13th Street by the Beaver Ponds.

The People and Families of Lyons

Of the fastest growing counties in Oregon, Linn County ranked #14 out of 36 total counties.

In Lyons, about 66% of adults are married. Lyons, compared to the great majority of similar-sized cities, is characterized by married couples rather than single adults. The size of households in the city is larger than most.

It’s notable that men are disproportionately common in Lyons.

Your Resource for Emergency Preparedness